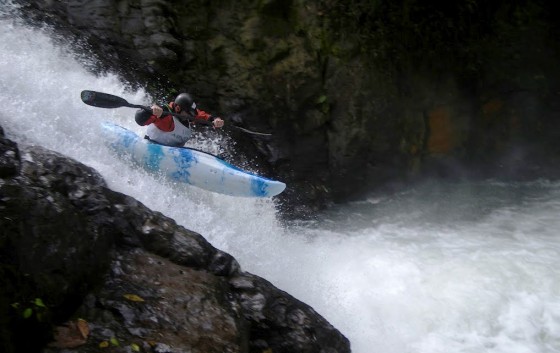 Sometimes it is obvious how a sport will progress overtime and other times it may be hard to tell the ultimate outcome. A clear progression in a sport like running is “faster times,” for example. But in other sports, the path the future is far more crooked. In kayaking, progression has been interesting to watch for a few different reason.

Boats and gear have changed so dramatically that paddlers are running rapids that were thought impossible 20 years ago. We went from the Dancer, a the long, high-volume boat, through a progression of smaller and smaller boats (X, Stubby, Big EZ), then back up to the Diesel, Remix and Greenboat — the whole time running harder and steeper rivers. While some boaters break waterfall records, most other boaters push the progression by running harder whitewater with more control and style.

The “World Series” is all about tying together some amazing kayak races around the world and naming a single world champion. Some of these races have been held annually for 15 or more years and some are more recent, but most boaters will understand the type of whitewater being raced after viewing the list of races:

These races where selected by a group calling themselves the Association of Whitewater Professionals (AWP). On its website, the AWP states that a lack of organization in the industry has forced them to attempt to give direction extreme racing and so they selected these six established races to track a single champion. So, over the course of 2010, paddlers competed in the five races and results showed that the first world champion would be determined in the sixth race in Mexico between two racers: Isaac Levinson, from the US, or Eric Deguil, of France. Whoever won the Alseseca race, held this January, was to be winner of the inaugural Whitewater World Series.

The week before the race, paddlers from around the world descended onto the town of Tlapacoyan, about a 5-hour bus ride east of Mexico City. Tlapacoyan is a small town nestled in the hills with access to numerous rivers (the Mexican version of Fayettville, WV) and is home to Adventurec, an eco village/resort that hosted the race.

In the days leading up to the event, the 30 or so competitors spent evenings talking over their day’s run and comparing strategies for the race. This is one of the longer extreme races with a weird mix of flat water sprinting combined with steep drops that required your full attention.

The Alseseca is a classic river and worth having on your paddling bucket list — it is a low-flow run that drops and drops and drops some more. There are something like 15 waterfalls in 2 kilometers, and that is just the upper section. The signature rapid is S-Turn. Never have I seen a rapid that looks so nasty but also so straight forward — a 12-foot right boof into a tight channel that pinballs to the right and left downstream. This most intimidating rapid is about halfway down the river, so you paddle into S-Turn with muscle burn and out of breath — and on edge. Like many races, it turns into a mental game where you are trying to convince yourself to go faster while your gut tells you to take it slow.

Some other drops, like Sticky Hole, are micro-holes that, if not run properly, will stop your downstream flow, costing crucial seconds. Another drop called OchoTopes is straight forward, but has been know rattle heads. Most of the drops are fun, steep slides with obvious lines that will get you feeling like a champ, but not deliver the beat-down you half expect.

The race started above a 10-footer that can easily kick you off-line, but also offered a great view for spectators. This race is like no other in that there were rescue teams at 11 different drops along the course. If someone got stuck in a hole and couldn’t get out, a rescuer on a tether would jump in, flip the boater up and send him on his way. Safety was taken very seriously thanks to Aventurec’s well planned organization. There was surprisingly little carnage, although one paddler who flipped at Triple Drop cut his eyebrow and got stitches in the attending ambulance.

Racers came from six countries. While most were male boaters, three women competed. Racers were released at 3-minute intervals to give distance between paddlers. In speaking with Eric Deguil after the race, he mention the first drop kicked him far right and he thought at that moment he’d lost the race. There was one report of a swim at S-Turn and another of a blown skirt, but the safety personnel were able to assist and keep things moving along.

Deguil was able to dig deep and deliver new record time of 12:26 – breaking the old record by 30 seconds. Deguil, from the French National Downriver team, won the series; Isaac Levinson, the Green River boater from Georgia, US, took second; and Pablo McCandless, the Olympic slalom racer from Chile, came in third – a pretty elite podium.

The race continues to generate rave reviews due to the quality of this section of the Alseseca and also the numerous other rivers in this region that can be run during a visit to the area. The Whitewater World Series was great way to showcase different areas and different paddlers, and I truly hope that it continues well into the future. While I stay realistic – I continue to hope for the day when more people care about paddling. You can see the results on the Alseseca Kayak Race website and more info about the series on the Whitewater World Series website. Viva Mexico!