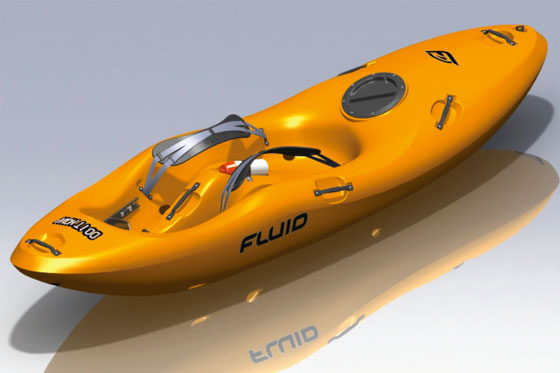 Fluid Kayaks, the South Africa-based kayak manufacturer, plans to start producing a sit-on-top whitewater kayak for beginning boaters next year. Dubbed the “Do It Now,” the boat will be made of the same pastic used in Fluid’s skirt-enclosed boats. The founder of Fluid, Celliers Kruger, says the boat will be in production in the United States beginning in February.

“It is unique, it is innovative, and it will change the way would-be paddlers are introduced to the sport of whitewater kayaking,” Kruger said in an email.

The big idea behind the boat is to remove the fear factor of being trapped inside a kayak, a big obstacle to keeping new paddlers in the sport. Presumably, the boat will feel more like a real kayak than “duckies,” the inflatable single-person rafts that many a would-be kayaker has paddled in whitewater.

According to Fluid, the boat also feels more like a normal kayak than previous sit-on-top whitewater boats. “This was done by bringing the sit-on-top knee area high enough to push against the elbows, with short leg braces to hold the elbows in place,” Fluid writes in a press release boat. “This allows the paddler to control the kayak properly by edging the boat accurately when needed, and it also allows the paddler to roll the boat.”