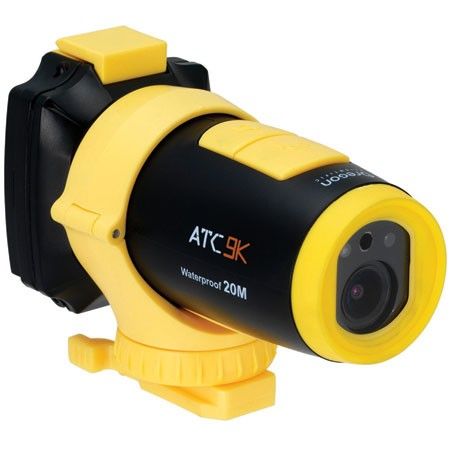 One advantage the ATC9K seems to have over its chief competitor, the the GoPro HD Hero, also $299, is its 1.5 inch LCD screen, which lets you see what your filming. The GoPro has no such display, so you have to guess about how shots are framed and can’t review what you’ve shot in the field. GoPro plans to release an accessory pack, called the BacPac, for the HD Hero that includes an external LCD screen.

The GoPro weighs 5.9 ounces with its waterproof housing while the ATC9K weighs about 7 ounces. The GoPro is also waterproof to 180 feet and has a battery life of 2.5 hours for continuous shooting, compared to the ATC9K’s life of about 1.5 hours. There are other differences as well, so if you’re in the market, do your homework.

Oregon Scientific also offers a GPS Module as a $69.99 accessory to the camera, which lets users map their location location, speed and distance traveled using Google Maps or Google Earth. The camera includes a built in accelerometer, called the G Sensor, that tracks G-forces exerted on the camera during shooting.