Surfing the Winter Away in Rincón, Puerto Rico 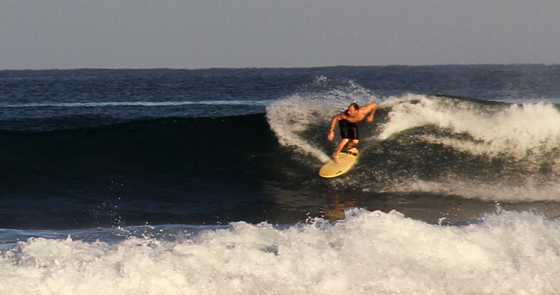 The waiter was suspiciously tan. My friends and I had decided to splurge one night during our trip to Rincón, Puerto Rico, at a swanky Spanish villa-style restaurant where they serve the food under silver hoods, like in old movies.

The sun-dried waiter, gaunt and gray-blond, maybe in his 50s, had an American accent. “I surf almost every day,” he admitted.

Spend some time in Rincón and you come to realize the place is full of surfers, both local and ex-pat, who are scraping by one way or another so they can ride waves everyday.

Surfers from all over the East Coast flock to Puerto Rico during the winter, and Rincón is the most popular surfing destination. During the peak season, from October to March, consistent swells roll in from storms in the Atlantic. When there’s no solid groundswell, the daily trade winds, which kick up every afternoon, will typically provide smaller waves to flirt with in the mornings, when the wind is mellow.

Rincón means “corner” in Spanish, a topographic feature that sets the stage for great surf. The north side is dominated by Sandy Beach, a long beach break that lands on flat reef in places. As the coast rounds to the west, it gets more rugged and the swell break over the point and reef breaks that Rincón’s famous for: Domes, Maria’s, Tres Palmas. 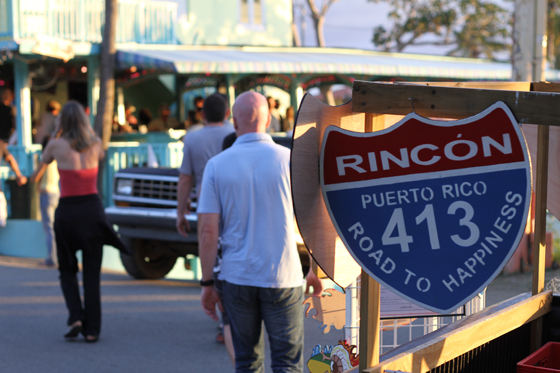 Route 413, the “road to happiness,” is the road that runs along the coast in Rincon.

This year, I had a choice. I could buy a fancy wetsuit or buy a plane ticket to Puerto Rico. Along with some friends and family, I decided to lease a condo in Rincón for a week in early March.

When we left, there was still snow on the ground outside my home in New Jersey. It was in the 70s and 80s in Puerto Rico. We quickly established a routine: surf, eat, drink, sleep, repeat. We went snorkeling and SCUBA diving. We saw octopus, dolphins and whales.

The most popular surf spot was Maria’s, a wide reef break tucked just around the west side of the point with a view of a lighthouse from the line up and a surfer bar on shore. Pure luxury. During a big swell, these waves can reach epic proportion, but they stayed under the head-high mark during our visit.

The waves break at multiple spots as they wrap around the corner, which is a good thing, because beginning at around 9 a.m., the place turned into a zoo. You compete for waves with old dudes on long boards, whipper-snappers on short boards, boogie boarders and sea turtles. Like I said, it’s popular.

Clean sets of waves roll into Sandy Beach, the surf break on the north side of Rincon.

My friend who’d surfed there before recommended getting up before sunrise and paddling out in the dark to catch some empty waves. I never got up in the dark, but I did notice that the earlier you go out the small — and older — the crowd. This I attribute to the party scene around Rincon: hard drinking 20-somethings rarely get up at dawn.

Puntas, the neighborhood along Sandy Beach and up the steep hills behind it, is party central. The epicenter of debauchery is Rock Bottom Bar, attached to Casa Verde Guest House. Tamboo, a bar and restaurant right on Sandy Beach, is also popular. If you stay in this area, be prepared for late night noise. Alternatively, find lodging further up the hill.

If you stay in Rincón for a few days, like we did, you’ll probably keep seeing the same people over and over.

We ate breakfast most mornings at the English Rose, a terrific restaurant tucked away in the hills between Puntas and downtown Rincón. Our waitress there most mornings was also our waitress at Ode to the Elephants, a tasty Thai place where we ate dinner twice. Our gaunt waiter from the swanky place turned up later across the street from our condo, where he ran a small clothing and crafts shop with his wife and daughter. Living the surfer’s dream takes elbow grease. 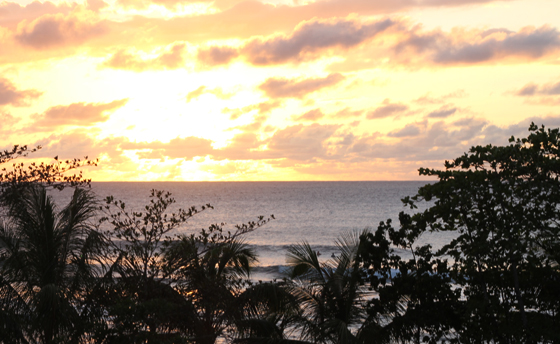