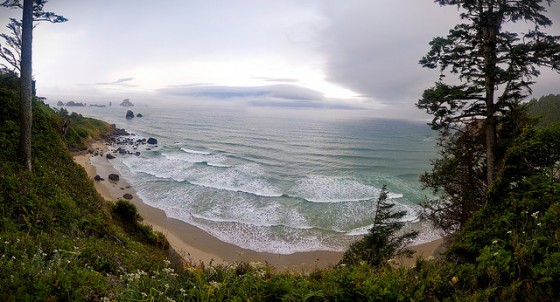 Seeking to put some numbers behind the notion that natural coastlines have economic and recreation value, Surfrider Foundation has released the results of a study that found that 80% of Oregonians visited the coast last year, generating an estimated $2.4 billion in expenditures.

The survey of 4,000 Oregonians investigated participation in activities such as surfing, kayaking and hiking, and sought to map out the areas most used for outdoor recreation.

Travel expenditures by travelers to the Oregon coast, broken down by percentage of the total spent.

The back drop for the study, which was conducted in partnership with two other non-profits, Ecotrust and NaturalEquity, are plans to develop renewable-energy facilities to harness wave-power from the ocean off Oregon’s 362-mile coastline.

“This keen interest in Oregon’s green ocean resources has shed light on the many problems involved with accommodating a modern use of ocean energy, while still ensuring sufficient protection of the nearshore ecosystem and existing human uses,” the authors of the report wrote.

In coordination with the federal government agency that permits wave-energy projects, Oregon state officials are developing a comprehensive plan, known as the Oregon Territorial Sea Plan, to guide decisions about where wave-energy facilities could be built. However, the authors noted, there was little data available on how and where recreationalists use the coastline, which should influences those decisions.

“”Furthermore, non-consumptive recreational ocean use provides coastal communities and the state of Oregon as a whole with considerable economic and social benefits,” they wrote. “As Oregon moves forward with the development of its comprehensive plan, it is critical that these effects are better understood in a geospacial context.”

The full report and a summary are available for download from Surfrider’s Oregon Chapter.