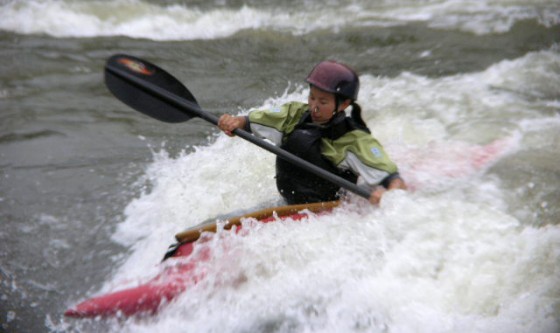 Whitewater paddlers in Washington DC are like hogs in muck. They can work high-paying city-slicker jobs and still paddle world-class whitewater in the evenings and on weekends. It’s a rare combo.

Tons of whitewater rivers snake through the Appalachian Mountains of the surrounding states of Maryland, Pennsylvania, Virginia and West Virginia, and the region has a rich history of whitewater exploration and innovation. DC hosts one of the world’s largest whitewater paddling communities.

Here we’ll focus on paddling destinations near DC that offer the best balance of convenience and quality.

Just ten miles west of the Capitol Dome, the Potomac River drops into Mather Gorge, creating a whitewater playground for paddlers of all abilities. The top of the gorge is dominated by Great Falls, a river-wide cataract that offers solid class 5+ whitewater at the right flows. Don’t mess around here if you are not an expert whitewater paddler.

Below the falls, the rivers mellows into what is typically class 2-3 paddling for a couple of miles, though at high water this can be a burly stretch as well. It is possible to put in below the falls from either the Virginia or Maryland sides of the river by parking in Great Falls Park and hiking down to the river. The put-in on the Maryland side, called Sandy Beach, has a more reliable path.

A parking lot near a riverside restaurant called Anglers Inn, further down river on the Maryland side, is a popular starting point for padding up river to play in the rapids. A number of whitewater kayaking schools teach classes on the mellow stretches of river here.

For whitewater boaters who are willing to drive for adventure, another hub of high-quality whitewater boating is just 3-4 hours to the west, Several classic whitewater runs are to be found on either side of Interstate 68, between Cumberland, Maryland, and Morgantown, West Virginia.

These include the Lower Youghiogheny River, a popular class 3 stretch that sees heavy rafting traffic, and the Upper Youghiogheny, a gorgeous class 4 stretch that runs many summer weekends due to dam releases brokered by the American Whitewater Association.

Other popular runs in the area include the Cheat River, the Blackwater River and Big Sandy Creek. There’s also a recently constructed artificial whitewater park, Adventure Sports Center International, at Wisp Mountain Resort, offering the luxury of an escalator that carries paddlers back to the top of the run.

This is a very rural area, so the cultural offerings are few and far between. Friendsville, West Virginia, at the takeout of the Upper Yough is a good place to meet paddlers and has had a few decent places to eat over the years. The town of Ohiopyle, Pennsylvania, at the put-in of the Lower Yough, has some dining options. Little Sandy’s Restaurant off Interstate 68 in Bruceton Mills, WV, is another paddler hangout.

The Cheat River Festival, a long-running paddler’s gathering, takes place in Albright, WV, during the spring, typically around the beginning of May.

The rivers around West Virginia’s New River Gorge, about a 5 hour driver from DC, are one of the top white destinations in the world. It’s a long drive, but for any serious DC whitewater boater will eventually end up here. These are terrific, challenging rivers in amazing country.

The two must-run rivers are the New River and the Gauley River. The New offers class 3-4 boating through the New River Gorge, a deep canyon filled with huge sandstone boulders and spanned by the New River Gorge Bridge, the tallest single span bridge in the world and site of a yearly base jumping festival.

The Gauley River drops 668 feet through 28 miles of some of West Virginia’s most rugged terrain. Paddlers generally run one of two sections at a time, the class 5 Upper Gauley and the class 4 Lower Gauley. The Gauley runs in the spring and in summer after heavy raains, but the most predictable flows come in the fall during dam releases when Summersville Lake is being drained for the winter.

Both the New and the Gauley are popular rafting runs, and there are a number of rafting companies to choose from. The cultural hub of the area is the town of Fayetteville, and a popular paddler meeting spot is Pies-and-Pints, a gourmet pizza restaurant.

Each fall, during Gauley release season, American Whitewater hosts Gauley Fest, one of the biggest paddling festivals in the world and what inevitably turns into a raucous party.

The areas and rivers highlighted here are some of the best, but are just a taste of what’s available. Among the three states surrounding DC, there are scores of other whitewater runs.

American Whitewater’s national river database is great place to find out more. Several guidebook also cover rivers in this region, including A Canoeing & Kayaking Guide to West Virginia, 5th and Appalachian Whitewater: The Northern States, 4th. You can also mine the staff of local paddling and outdoors stores for info.