Reviews > Everything else > Chasing Barefoot Runners 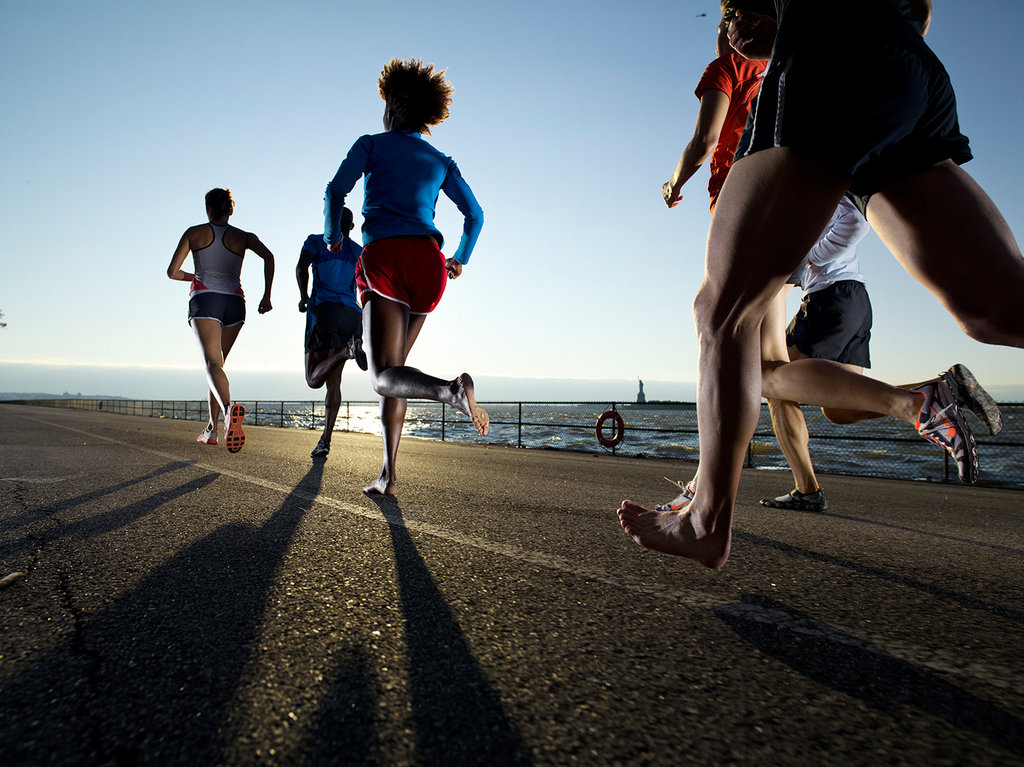 I like to feel the earth beneath my feet. Luckily for me, barefoot or “minimalist” running is all the craze in the running world.

A number of companies are already producing “barefoot” running shoes, including Nike, Newton and Vibram, and the popularity of this back-to-nature version of running has now pushed running shoe giant, New Balance, to come out with NB Minimus, a minimalist shoe line that will be released in March.

Merrell recently partnered with Vibram, creators of the wildly popular Vibram Five Finger shoe line, to produce Merrell Barefoot, a collection of stripped-down shoes designed for a broad range of outdoor sports that will be released in February. And not to be outdone in the undoing of shoes, Nike released images of a concept “Footsticker” late last year (photo below), essentially paste on soles that protect only the high abrasion parts of the foot, the heel, toes and ball.

What initially appeared to be a fad among a fringe group of runners has transformed into a global movement and some shoe companies, faced with a potential threat to their profits, have decided the best response is to encourage people to pay for less shoe instead of no shoe. Hence the new minimalist shoe lines for 2011.

Although quite different in appearance, the new shoes share certain characteristics: uniform cushioning on both the heel and the toe of the shoe; the ability to bend or twist like wringing out a wet towel; and the absence of stiff arch support. They are basically rubber shields between your bare feet and the ground, protecting you from sharp objects.

The new pared-down shoes are designed to encourage fore-foot striking, the style of running natural to humans.

While 75-80% of shod runners still rely on shoes that encourage the rear-foot strike, landing on their heel and rolling onto the forefoot, the minimalist method is gaining traction among runners looking for variety or experimenting with injury prevention.

Running barefoot is not new, of course. It dates back to humankind’s primordial explorations on two legs. In recent times, however, its popularity has skyrocketed after a long period of heel-striking dominance, beginning with the 2009 publication of Christopher McDougall’s Born to Run: A Hidden Tribe, Superathletes, and the Greatest Race the World Has Never Seen, a New York Times bestseller advocating that runners toss out their sneakers.

The trend was further fueled by a study published in January of last year in the renowned scientific journal, Nature.

The principal investigator, Daniel Lieberman, a professor in the Department of Human Evolutionary Biology at Harvard University, argued that the introduction of the running shoe in the early 1970’s and the accompanying highly cushioned sole may be the culprit of many repetitive stress injuries incurred while running.

The barefoot running form is quite different than that of a shod-runner. Liebermann found that a barefoot runner has the tendency to strike with their fore-foot or mid-foot while a shod runner predominantly strikes with their heel.

So what’s the harm in a little heel-striking? Leiberman claims that the fore-foot strike landing has a much lower impact collision than that of heel striking.

Although no conclusive evidence has yet to be provided, it is hypothesized that the way in which runner’s feet hit the ground may determine whether they develop repetitive stress injuries.

But there are also potential drawbacks to barefoot running. Unlike our ancestors who ran on relatively soft earth as they fed and defended themselves, the modern runner often strikes on concrete or asphalt. One of the most common arguments against running barefoot is that we land on much harder surfaces than did our predecessors and that the body is not built to withstand pounding firm pavement with bare soles.

However, Lieberman, a runner himself, claims on his website that runners will typically adjust leg stiffness depending on the running surface and experience similar impact forces on both hard and soft surfaces.

Experts also advise that converting to minimalist shoes can’t be done overnight. It’s a gradual process like any training regimen that requires time and patience and for some runners, it’s just not worth it.

“It seems like a lot of effort and risk of injury in the immediate term for the possible return of having stronger feet and reduced injury risk over the long term,” said Dr. Jonathan Little, a competitive runner of 16 years, who has lightly experimented with barefoot running in his training. “If I was a pro athlete with lots more time, I might try to fit it in but I’d rather get in a few more real miles then find a park and jog barefoot.”

Not all shoe manufacturers have blessed the trend either. In a recent publication, Brooks Sports maintained that although running barefoot may be beneficial for some runners, they “strongly believe the vast majority of the running population should log most of its mileage in a performance running shoe, not barefoot.”

There’s also the weather to consider. Linda Abbott-Simons, an avid runner from Kelowna, British Columbia, noted that the minimalist shoes offer little insulation from the cold and moisture, which prevents her from using them in Canadian snow and ice.

But Abbot-Simons, who hopes to run a half marathon with each of her five grandchildren, still swears by her odd-looking Vibram Five Fingers, which her husband has dubbed her “Monkey Boots.”

Running in normal shoes, she felt constant hamstring tightness and had problems with her iliotibial band in her thigh. “I went to a chiropractor once a month,” she said. “I went to a massage therapist once a month.”

Since she started training in her Five Fingers shoes she hasn’t needed a massage and feels like she can “run forever.” Whether the barefoot trend has such stamina remains to be seen.

>> Born to Run: A Hidden Tribe, Superathletes, and the Greatest Race the World Has Never Seen
>> The Barefoot Running Book Second Edition: A Practical Guide to the Art and Science of Barefoot and Minimalist Shoe Running