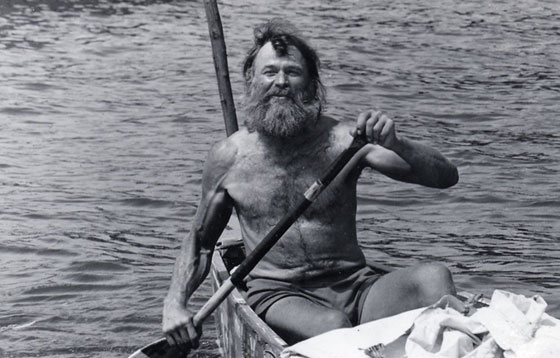 Don Starkell, a legendary adventurer who held the record for the longest canoe trip in history, died of cancer January 28 at his home in East Kildonan, Winnipeg. He was 79, according to the Winnipeg Free Press.

Starkell’s story is one of redemption through energetic communion with nature. Neglected by his parents as a child and subsequently shuffled through foster homes, he learned to canoe during a flood in 1950. He got hooked on paddling while shuttling food and people around in the aftermath of the deluge.

After his wife left him in 1970, he concocted a seemingly outlandish plan to paddle with his two sons, Dana and Jeff, from Winnipeg to the Amazon River. Ten years of preparation later, he and the boys launched their canoe from the banks of the Red River, headed for the Amazon.

They paddled the Mississippi and crossed the Gulf of Mexico. They were robbed, shot at and jailed. Fed up, Jeff left the expedition early, but two years and 12,000 miles after they’d left Winnipeg, Starkell and Dana reached the mouth of the Amazon in Brazil.

It stands as the longest canoe journey in history, according to the Guinness Book of World Records. The trip was chronicled in a book, Paddle to the Amazon: The Ultimate 12,000-Mile Canoe Adventure, and work was done on a documentary.

In 1990, Starkell set out to paddle 3,000 miles through brutal cold, from Churchill, Canada, through the Northwest Passage, to the Canadian town of Tuktoyaktuk. Three years later, 30 miles short of Tuktoyaktuk, he had to be rescued when his boat froze in the icy waters. He lost part of his fingers and some toes to frostbite. The book Paddle to the Arctic: The Incredible Story of a Kayak Quest Across the Roof of the World recounts the epic.

Throughout his life, Starkell preferred to live like he was camping, even when at home. He often slept on a roll-out bed in his living room, pretending he was next to a riverside campfire. “Don’s room looked like an old explorer’s cabin,” Chris Forde, a Starkell family friend, told the National Post.

Up until very recently, Starkell was on the water, paddling a kayak around on the Red River. Bon voyage, Don. Bon voyage.