Reviews > Everything else > Drink of the Gods

Drink of the Gods 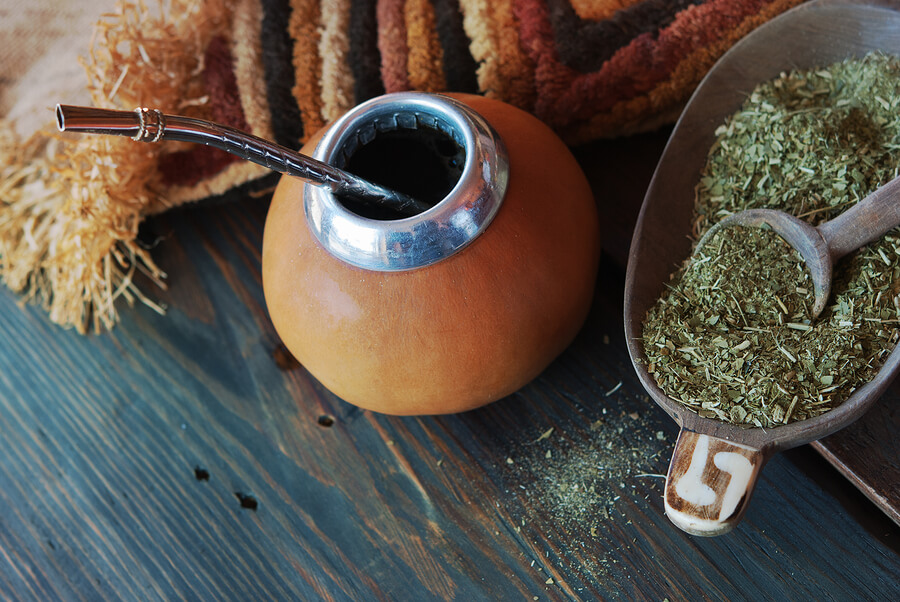 The locals were getting restless.

The afternoon heat in Paraguay was brutal and I was holding up the circle of five other women waiting for an ice cold drink of yerba mate under the shade of a tajy tree.

“It’s not a microphone,” Blanca teased, referring to the hollowed-out cow horn in my hand.

I sucked out the last bit of bitter drink with the metal straw and passed the empty cup back to Blanca so she could refill it.

“What did you say is in this again?” I asked.

“Yerba, ice and dog balls,” she replied, “good for the stomach.”

A visit to southern South America is not complete without joining the locals for a round of yerba.

I find yerba more energizing than any sports drink I’ve tried. Because it stimulates the central nervous system, after just a few pours I feel refreshed and hydrated.

On the caffeine scale, it falls between coffee and tea. With a slightly bitter taste, yerba is naturally caffeinated, and full of potassium and other minerals.

When I hiked epic Iguaçu Falls in Argentina, my tereré kit came with me.

When I left Paraguay to surf the shores of Bali, I made room in my small backpack for a cow horn.

And when my husband and I got married last year, our family and friends celebrated with a chilled round of tereré.

That afternoon under the tajy tree in Paraguay was one of the first times I drank tereré.

As part of my work for Peace Corps I was discussing with the gathered women how the local rainforest could benefit from a reforestation project.

I had been invited to my neighbor Blanca’s house to meet with a committee of women interested in raising money to build energy efficient wood ovens.

In exchange for receiving an oven, the women would agree to plant 100 trees each.

“Yes,” Blanca agreed, “we spend too much time gathering firewood. Time we could spend with our families, drinking tereré.”

After Blanca’s comment about the drink’s ingredients, I was relieved to learn that yerba is often flavored with hand-ground weeds, bark, roots or flowers that grow wild and are collected for taste and curative properties.

These native additions often have comical names — like “dog balls.” Paraguayans claim the additives possess all sorts of healing powers, including remedies for cancer, upset stomach, AIDS, miscarriage and for ailments afflicting each of the organs.

I’ve learned a lot about yerba matte since that afternoon at Blanca’s.

Known as “The Drink of The Gods” to many indigenous groups, yerba matte is a species of holly (Ilex paraguariensis) that grows as a small tree only in the shrinking Atlantic Rainforest of South America and is harvested for consumption as a shrub.

The branches and leaves are dehydrated and slow roasted in a wood-burning oven. The roasted material is coarsely ground and left to age for a year before it is packaged and sold by the pound.

While green tea contains almost 150 antioxidants, yerba mate has close to 200. Researchers at the University of Illinois have found yerba mate to exhibit cancer-fighting activity while other studies have linked it with weight loss and lowering of bad cholesterol.

In America, yerba mate is available loose if you prefer the traditional way, or in a tea bag, (found online and in health food stores for about 50 cents for 2.5 grams) which avoids the need to track down the equipment.

Just like coffee or beer, the taste can be slightly bitter at first. Simply add mint, lemon or honey to sweeten things up. It’s best to have a little something in your stomach before drinking it to avoid becoming lightheaded.

In South America, the ritual of drinking yerba matte is very social and informal.

It’s an adult social activity and children are generally excluded. Side conversation is fine, and there will be a lot of jokes and laughter. But if someone mentions a “microphone,” you have been holding the cow horn in front of your mouth too long.

The server starts by filling a small cup — typically made of cow horn — a quarter full of yerba and then tops it with ice water, handing the full horn directly to the person on the server’s left. The metal bombilla acts as both a straw and a sieve, preventing the drinker from sucking up a mouthful of loose yerba.

One drinks all the fluid (it is considered unhygienic to leave any) and passes the empty horn back to the server who refills it with more water and passes it to the next person on the left in the circle.

When you’ve drunk your fill, you simply say thank-you and wait patiently until the rest of the group has finished.

It’s a well choreographed dance that can go on for hours.

But what if you are in Paraguay and there isn’t time to sit and drink tereré?

The absolute only way to get out of it without hurting any feelings is to claim you just ate watermelon.

It is an undisputed fact in Paraguay that eating watermelon and then drinking yerba mate will make your stomach explode.

I have seen cups knocked out of people’s hands the way you would push someone out of the path of a moving bus to prevent combining watermelon and yerba.

Lying isn’t a problem, most of the time you haven’t even seen a watermelon in six weeks, but saying no directly is terribly insulting.

Telling someone they are drinking something made of canine gonads – not so much.