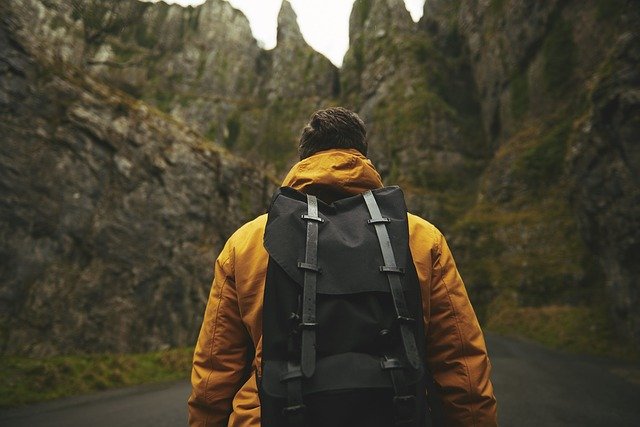 While serving in Iraq two years ago, Troy Yocum used his spare time to devise an epic plan.

Concerned for a friend and fellow veteran who had lost his job, Yocum decided to raise money for veterans who returned home to find themselves jobless and in debt.

For 15 months, he’d walk 7,000 miles across America, through 30 cities, joined by his new wife and trusty dog. He’d beat a drum as he walked, as a symbolic way to draw attention to veterans’ needs and raise $5 million for them and their families.

Now, five and a half months and 2,760 miles into his journey across America, Yocum, 31, sounds energetic despite the rigors of his Drum Hike, as he’s dubbed the adventure. I call him as he’s passing through a small town in Utah. It’s mid-afternoon and he’s in his support vehicle, an RV, talking excitedly about his walk.

“There’s been an overwhelmingly enthusiastic response to our mission,” he says. “We get 40 or 50 voicemails a day.”

He explains that he uses many of the skills he acquired in the Army to help him survive walking day after day for a year and a half.

He likes to be on the road by 8 a.m. so he can achieve his 20-mile-a-day goal. Depending on the weather, he takes small breaks and drinks water accordingly.

When he and his wife, Marieke, and pooch, Emmie, need a break from the RV, they stays in donated motel rooms or in the homes of strangers who volunteer to house them for a night.

Even with his training, the journey has been a test of his mental and physical endurance. He’s lost 20 pounds, dropping from 240 pounds to his current weight of 220 pounds.

At first he’d get massive, painful blisters, but he learned to alleviate the pain by using an old army trick of injecting tincture of benzoin, a solution that hardens skin, directly into the blister.

He’s yelled at. While walking, he’s been off the road into a ditch. He’s the target of angry teenager’s who throw rocks or try to knock him off the road with their car doors.

He was almost sideswiped by a tire that blew off a big rig, flying across multiple lanes and missing him by only a few feet.

He’s been hit by rocks kicked up by trucks, one leaving him with a nasty five-inch-wide bruise. A copperhead snake missed biting him by half an inch. A gang of ravenous swans stole his lunch sandwiches.

But the sacrifices lead up to the moment when he is able to hand donations to soldiers.

Yocum grows a little somber when he recalls one day when he was able to help a struggling veteran. The man was standing in a crowd of people who had gone to hear Yocum speak.

Mid-sentence, Yocum pulled out a giant Publishers’ Clearinghouse-style check for the amount of $5,000 and gave it to the soldier. The man was stunned silent.

“This is what we wanted to do, literally hand out donations while we walked across America,” Yocum said.

Before embarking on his greatest adventure, Yocum realized that he could afford the support vehicle RV, but not much else, so he contacted potential sponsors about either donating materials or money for his trip.

Everything from his walking shoes to banners to bugler players that occasionally sound Yocum’s entrance into a city to the food his team eats (human and K-9) is donated by sponsors.

Yocum does all the walking himself – joined much of the time by Marieke.

For Yocum, seeing America on foot is a beautiful, fulfilling experience. For his wife, it’s a tour of her brand new country.

Marieke was born and raised in Germany. She met Yocum about a year ago while he was still serving in Iraq and moved here earlier this year. They were married in May, at mile marker 256 in Louisville, Kentucky, two weeks after starting their trek. Joining him wasn’t really an option, she says.

“He didn’t want me to miss this experience, this hike across America,” she says through a slight German accent. “And of course I can help him.”

Marieke, 27, has so far walked all but 400 miles of the journey with her husband. When she’s not walking, she follows him in the RV and catches up on the business aspects of the journey.

She is overwhelmed by the rugged and beautiful terrain she has seen. “Except Kansas,” she says, laughing. “Not much in Kansas to see.”

She uses their walking time to decompress with her husband. “We meet so many kind people, so many people who support us,” she says. “But it’s the widows [of veterans] that really get me. I want to help them the most.”

During much of their down time, Yokum and Marieke return phone calls and e-mails. They receive hundreds of e-mails from charities or organizations who wonder when they are going to pass through their town.

According to his original plan, Yocum’s still has another 5,000 or so miles to go. But he’s gotten hundreds of requests from people who want him to visit cities that are off his route.

“We’re looking at the forty fourth or forty fifth morph or our original map,” he says. “I’d love to do another 500 miles. But after 7,000 I’m pretty sure I’m going to be tired.”